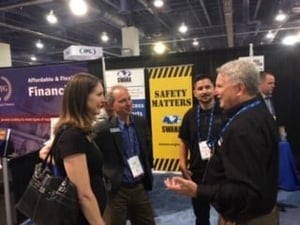 During the first week of May, I attended Waste Expo in Las Vegas to work the SWANA booth, along with my colleague Estela Martinez. This gave us an opportunity to meet with members of SWANA and prospective members. SWANA’s Executive Director and CEO, David Biderman was also with us and had the chance to speak to attendees.

This is the third consecutive year that I attended and worked the SWANA booth at Waste Expo. The awareness of SWANA has increased substantially since that first year I attended the show. This increase in exposure is due to the amplified media and marketing presence that we have undertaken. SWANA is the voice for solid waste and recycling, and due to our enlarged media exposure people in the industry are aware of who we are.

One of the highlights of working the show is meeting and interacting with members. It is always cool to see a member’s face light-up when they see the SWANA booth. They take pride in letting us know they are a member.

With SWANA’s WASTECON® taking place in Phoenix at the end of October, we had strong representation from our Arizona Chapter. Members of the chapter assisted us in the booth promoting WASTECON and SWANA membership. It was great to work alongside our members and hear from their perspective what they are most looking forward to at WASTECON. 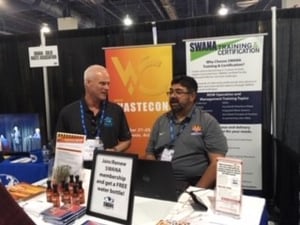 Working through the Department of Commerce, David Biderman met foreign delegations attending Waste Expo. He answered many questions throughout the show and was able to debunk common myths circling in the industry. Many of the people that David met with came by the SWANA booth and a few of them joined SWANA.

Prior to the opening of the trade show, I attended the Investors Summit. This provided an opportunity to hear from industry CEO’s. David also spoke on a panel with two SWANA members as they discussed the ongoing challenges municipalities are facing, especially with China recycling restrictions.

Many attendees asked us the difference between Waste Expo and SWANA’s WASTECON. Waste Expo is primarily a trade show with some sessions. WASTECON is a conference with keynote sessions, breakout sessions, training courses, and a trade show. WASTECON provides numerous professional development and networking opportunities. WASTECON registration is now open and I encourage you to attend. For more information, visit https://swana.org/Events/WASTECON.aspx and keep an eye out for the early bird pricing. I look forward to seeing you in Phoenix.

Darryl Walter is the Director of Membership for SWANA. When Darryl isn’t promoting the value of SWANA membership and SWANA events such as WASTECON, you can find him on the tennis court or softball field.